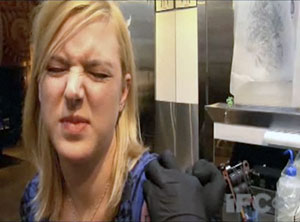 WARNING: This video contains graphic scenes of *almost* attractive people having sex. Don’t watch it at work, or if your kids (or parents) are around, or if you have something better to do.

Today (yesterday?), in Young American Bodies Episode 30 (on IFC.com), Natalie (played by Nikita Word) gets a new tattoo! We’ve seen that she already has several, but it’s kinda neat (or gimmicky, see below) that they incorporated getting her latest piece into the show. Afterwards, we see her and Ben (played by creator/director Joe Swanberg) drawing silly tattoos on each other with markers as part of their foreplay. I hope some time has elapsed between the two scenes, because coloring in a freshly inked tattoo (with Sharpies, no less!) seems like a really bad idea.

The large floral rose tattoo was done by Brian Clutter of Insight Studios Metamorph Tattoo Studios in Chicago, who gets a few seconds of camera time as he works on Natalie/Nikita’s upper arm.

Do you guys watch this show? I can’t figure out if it’s genius or if it’s totally boring (or both). END_OF_DOCUMENT_TOKEN_TO_BE_REPLACED

Can I really call myself a “tattoo enthusiast” when I only have one tattoo (although sometimes when people ask I tell them I have four), and it’s been more than 5 years since I got it? I think so—I’ve been planning my next tattoo ever since (there’s also the incessant poring over magazines and websites, the indulging in obnoxious reality TV shows—and related gossip, the ogling of inked-up strangers, and the talking-the-ears-off of anyone who will listen to me ramble on about tattoos).

But now I’m realizing that this tattoo I’ve been planning will be a big, elaborate piece (O.K., not that big. Half-sleeve, maybe?) with dozens of layers of symbolism that will require not only the saving of many ducats, but much researching of tattooists, attempting to get an appointment with one of them, traveling to his or her shop, etc. A drawn-out process (haw!) to be sure.

I’m still planning the masterpiece, but honestly, I don’t think I can wait that long! So I’m going to start small, just to get a taste… Stay tuned.